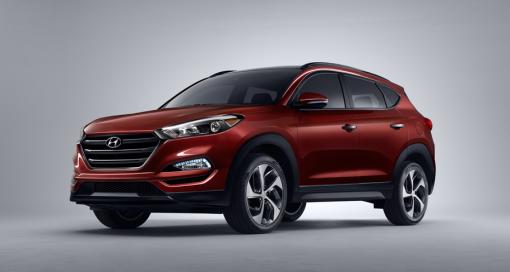 When we first saw the 2016 Hyundai Tucson at the Geneva Auto Show, there weren’t many North American specs we could sink our teeth into, however, the buzz was there regardless.

Well, now that the 2016 Hyundai Tucson has made it’s official North American debut at the New York Auto Show, we know lots more and we’re super excited about the latest crossover to grace Hyundai showrooms. While it might not look that different from the outgoing model, the subtle design changes and cues Hyundai implemented were definitely much-needed and make a world of difference in the overall appearance of the 2016 Hyundai Tucson.

The first thing we notice about the new Tucson’s styling is that it looks very much like other recently introduced Hyundai models like the Sonata showcased at the same auto show in 2014. The front grill has a rather distinctive appearance that gives the new Tucson an overall look of sophistication combined with an aggressive stance. The 2016 Hyundai Tucson looks rugged and sporty now, something the previous generation may have lacked. We also find it to be a far cry from the current model which means that it will be instantly recognizable on the road. That’s a plus for those who like to tell the world they have a brand new car.

Inside, the 2016 Hyundai Tucson’s updates are immediately seen in the brand new 5” LCD touchscreen (with a optional 8” screen along with an 8-speaker audio system and internet radio available, as well), as well as the abundance of soft-touch materials.There are also new safety features available on the 2016 Hyundai Tucson such as blind-spot monitoring, rear cross traffic alert, lane departure warning, and forward collision warning with automated braking.

The most exciting part about the brand new 2016 Hyundai Tucson is, of course, the all-new 1.6L 4-cylinder turbocharged mill that produces 175 horsepower, mated to a brand new 7-speed dual-clutch automatic transmission that replaces the outgoing 2.4L. The base 2016 Hyundai Tucson will be available with the previous gen’s 2.0L 4-cyl (164 horsepower), and 6-speed automatic transmission.This new engine means new fuel ratings for the 2016 Hyundai Tucson, and they’re much better than the outgoing model. Fuel efficiency sits in the 9L/100km range, which is a definite improvement over the previous generation.

Longer, wider and with an available hands-free power liftgate, the 2016 Hyundai Tucson is all kinds of practical and user-friendly. This makes the 2016 Tucson the perfect family vehicle, ideal for urban and suburban life. The current Hyundai Tucson was a great vehicle. The new Tucson takes the features that we loved about the previous model and improves them tenfold.

To learn more, contact us today at Kitchener Hyundai!